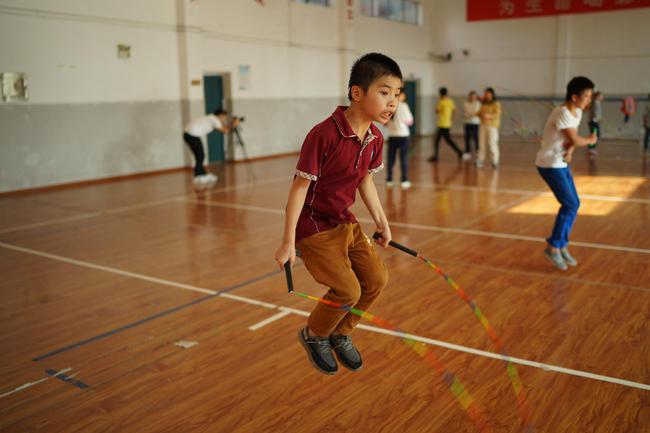 16-year-old Jiang Wenwen closed her eyes and took a deep breath. Wearing a blindfold, she held her breath, bent over to stand on the 100-meter starting line, and connected her wrist to the front runner by a red rope. With the firing of the starting gun, she ran to the track against the darkness, rushing to the finish line under the guidance of the lead runner.

There was silence in the stands for a second, and then burst out stormy applause and cheers for a long time-this is a tribute to the running visually impaired student athletes.

On October 13, the Chongqing 2020 Middle School Student Track and Field Championship was held at the Jiangjin District Stadium. For the first time, the disabled were included in the competition. Three categories were added: hearing disabilities, visual disabilities and intellectual disabilities.

The disabled and able-bodied people compete on the same field, which is rare in student sports events. This time, more than 70 students from 34 special education schools in Chongqing stood on the same field as healthy children.

Jiang Wenwen is one of them. When she finally stood on the long-awaited track, she was a little nervous. In order to participate in this competition, she has been training for nearly a month.

The lead runner Huang Qiu next to    patted her on the shoulder: "The result of the race is not important, standing on the track means victory!"

The 26-year-old physical education teacher Huang Qiu is the "eyes" of these visually impaired children. According to the rules of the competition, every visually impaired athlete has a one-to-one lead runner to guide them to the finish line. The two are connected by a cloth rope, and the two ends of the rope are wrapped in their hands.

"Compared with ordinary children, visually impaired children have different perceptions of movements and require more time and energy to train." Huang Qiu said that for an ordinary lateral lift, it is easy for ordinary children to raise their hands. Children with visual impairments often don’t know where to place their raised hands. At this time, the teacher needs to demonstrate first, let the students touch the teacher's arm to imitate, and then correct. "Visual impairment also affects children's physical sensation and coordination, and their injury frequency and exercise intensity are greater than other children."

Due to epidemic prevention and control reasons, this competition is not open to spectators. But the cheering in the stands was still loud. Teachers, coaches and student athletes from other representative teams took to the stands early to cheer the disabled children.

Jiangjin Jukui Middle School's top sports student Li Keliang participated in the general group competition in the morning and stayed with his classmates to watch the special group competition in the afternoon. It was the first time that he saw these special friends of the same age compete on the same field, and he felt admired: "During the competition of a hearing impaired athlete, there was a player who got up and insisted on running to the finish line after a fall. It was great!"

Li Longmei, a representative of the 19th National Congress of the Communist Party of China and principal of Chongqing Special Education Center, stood by the sidelines, cheering for the children's running. "For disabled children, you can stand on the same track with healthy children. This is true respect and equality." For this day, she ran around and finally helped disabled children join the competition: "Look, just give the disabled With a platform for children, they can fully enjoy the joy of sports and feel the spirit of cooperation and struggle in sports." (End)