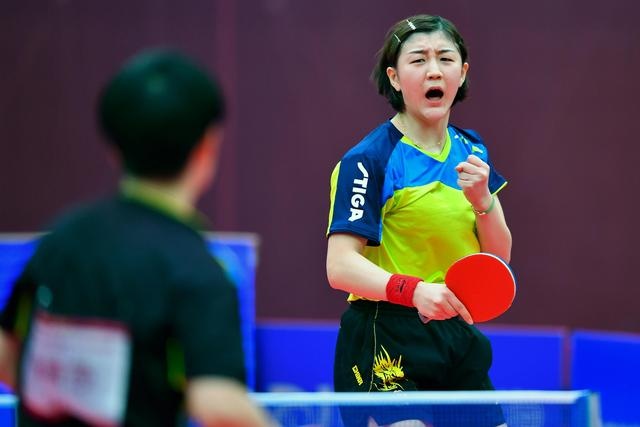 At the 2020 National Table Tennis Championships that just came to an end, Chen Meng's performance was very eye-catching. She overcame the slow-heating state in the past and won the women's singles and women's doubles champions.

In the first women's team final, the defending champion Shandong team led by Chen Meng lost 0-3 to the Hebei team composed of Sun Yingsha and He Zhuojia, winning the women's team runner-up. In the mixed doubles arena, Chen Meng still has regrets. She and Fan Zhendong, the world's first combination, lost to Liu Dingshuo/Qian Tianyi in the mixed doubles quarter-finals 2 to 4 and stopped in the quarterfinals. But in the following women's singles and women's doubles, Chen Meng became more and more courageous and won the championship one after another.

In the women's singles final, Chen Meng entered the state very quickly, defeating the defending champion Sun Yingsha in 4 consecutive rounds, and won the women's singles championship for the first time. In the women's singles championship this time, Chen Meng defeated Liu Weishan, Qian Tianyi, Wang Manyu, and Sun Yingsha successively, and the state was better than ever. Chen Meng said that a good mentality has brought good results: "I put my position lower. I was not in good shape before, so I played it out one point by one. This is my first singles champion at the National Championships. I was still very satisfied with the performance. Both the semi-finals and the finals are worth summarizing. I am very excited to win and I hope I will continue to work hard." In the semi-finals against Wang Manyu, Chen Meng played smoothly and also went straight. Winning the game in 4 rounds gave the opponent no room for maneuver. More than a month ago, at the Chinese table tennis team’s Olympic simulation match, Chen Meng lost to Wang Manyu 2-4. This time she won the victory cleanly. Chen Meng said “unexpectedly”: “Before the game, I felt that the opponent was in very good condition. , The mixed doubles also won the championship. I was still based on fighting against my opponents. This game was still won by the mentality and preparation before the game. During the game, I wanted to bite the score at the beginning of each game, not necessarily. Pulling the score apart, I also made very hard preparations. In the game, I also held the mentality of winning one game."

Chen Meng and Wang Manyu are very familiar opponents, and they are more and more tacit pairing partners. The women's doubles final of the National Championships started between Chen Meng/Wang Manyu and Sun Yingsha/Wang Yidi. The match was extremely stalemate. In the end, Chen Meng/Wang Manyu defeated their opponents 4 to 3 to win the championship. Chen Meng believes that being able to win in such a difficult situation has greatly enhanced the tacit understanding and trust between the two of them. They can always encourage each other when encountering difficulties in the game. Chen Meng said: "We both have a very strong belief in winning. Maybe after a mistake in the middle, Manyu was a little anxious on the court, maybe there was some self-blame, the play was a little tight, and I let her relax a little bit in the seventh game. Because the quality of her ball is already very high, I reminded her to release her play like mixed doubles. I think she will have a lot of energy after she releases it.” Wang Manyu was deeply convinced of this: “Just like Sister Meng said, When we are playing well, we are like one person on the court. When we encounter difficulties, when one of us is good and the other is bad, we can support each other and encourage each other, communicate very well, and trust will follow This competition has improved."

Looking back on the performance of the entire championship, Chen Meng described it as "consummation": "This match is a complete success for me. I can make timely adjustments in the individual events after the previous problems. The singles and doubles wins have improved me. The confidence in preparing for the battle at this stage is a good accumulation.” (Reposted from the 03 edition of China Sports Daily on October 14)